Tropical Weather Discussion for North America, Central America Gulf of Mexico, Caribbean Sea, northern sections of South America, and Atlantic Ocean to the African coast from the Equator to 31N. The following information is based on satellite imagery, weather observations, radar and meteorological analysis.

Based on 1800 UTC surface analysis and satellite imagery through 2215 UTC.

Potential Tropical Cyclone Two is centered near 10.4N 61.0W at 28/0000 UTC or 10 nm E of Trinidad moving W at 22 kt. Estimated minimum central pressure is 1009 mb. Maximum sustained wind speed is 35 kt with gusts to 45 kt. Winds of 25 kt or greater are currently confined to the northern semicircle. As of 2100 UTC, Peak seas are 13 ft within 120 nm NE quadrant of the center. Numerous moderate to strong convection is within 210 nm W semicircle and 240 nm NE quadrant. Numerous moderate isolated strong convection is elsewhere within 270 nm of the center. On the forecast track, the system will pass near or over portions of the southern Windward Islands tonight, and move over the southern Caribbean Sea or near the northern coast of Venezuela and the northeast coast of Colombia on Wed and Thu. Conditions appear conducive for development if the disturbance remains over water, and it will likely become a tropical storm near the southern Windward Islands or while moving westward across the southern Caribbean Sea. Please read the latest High Seas Forecast issued by the National Hurricane Center at website https://www.nhc.noaa.gov/text/MIAHSFAT2.shtml and the latest NHC Forecast/Advisory and Public Advisory at www.hurricanes.gov for more details.

Northern Gulf of Mexico: An area of low pressure centered over the northwestern Gulf of Mexico continues to produce disorganized showers and thunderstorms. This system is forecast to move slowly westward or west-southwestward and approach the coast of Texas during the next day or two. Slow development of the low is possible, and it could become a short-lived tropical depression near the coast before it moves inland on Wed night or Thu. Regardless of development, heavy rain will be possible along portions of the Texas coast later this week. For more information about the potential for heavy rain, please see products issued by your National Weather Service office. As of 2100 UTC, fresh to locally strong winds and seas of 4 to 6 ft are in association with this low. The system has a medium chance of tropical cyclone formation during the next 48 hours. Please see the latest NHC Tropical Weather Outlook at www.hurricanes.gov for more details.

A tropical wave is in the eastern Atlantic with axis along 37W extending from 03N to 17N, moving W at 20 kt. Scattered moderate convection is noted from 06N to 14N between 37W and 44W.

A tropical wave is in the central Atlantic with axis along 47W, extending from 02N to 14N, and moving W at 15 kt. Scattered moderate to strong convection is noted from 03N to 10N between 44W and 50W. This system is forecast to interact with another tropical wave over the next several days, and some gradual development is possible later this week while the overall system moves west-northwestward at around 10 kt across the central tropical Atlantic. There is a low chance of tropical cyclone formation over the next 5 days.

A tropical wave is in the central Caribbean with axis along 77W, S of Jamaica, and moving W at 20 kt. Scattered moderate convection is noted S of 17N between 72W and 81W.

A low pressure over the northwestern Gulf of Mexico has a medium chance of tropical cyclone formation during the next 48 hours. Please see the Special Features section above for details. A weak surface from just NW of the western tip of Cuba to just S of the western Florida Panhandle is inducing scattered moderate convection. Otherwise, mainly light to gentle winds and seas of 1 to 2 ft prevail. Some moderate SE winds have developed this evening in the far NE Gulf.

For the forecast outside of the northwestern Gulf, a weak ridge will continue to dominate the remainder of the Gulf waters through the week supporting mainly gentle to moderate winds and slight to moderate seas.

Aside from Potential Tropical Cyclone Two, a tropical wave located over the central tropical Atlantic will likely approach the Lesser Antilles by Thu night, cross the islands on Fri, and move across the eastern Caribbean Sea late Fri and Fri night. A surge in winds and seas are expected with this wave.

An upper-level low is centered just E of the Florida Straits. An associated surface trough resides over the NW Bahamas. As a result, scattered moderate convection is noted in the central and NW Bahamas. An upper-level trough then extends NE from the NW Bahamas to Bermuda, and scattered moderate convection in association with it stretches from 27N to 31N between 67W and 72W. The remainder of the Atlantic is under the influence of broad ridging, anchored by 1035 mb high pressure along 40N to the west of the Azores. S of 21N, fresh trades prevail. Strong NE winds are occurring N of the Cabo Verde Islands, extending N and E through the Canary Islands and off the Moroccan coast. Elsewhere north of 21N, mainly moderate winds prevail. Seas are 8 ft or greater from 08N to 20N between 40W and the Lesser Antilles.

For the forecast W of 55W, the Atlantic ridge will continue to dominate the forecast waters through at least Fri, supporting moderate to fresh easterly winds S of 22N, and gentle to moderate E to SE winds N of 22N. 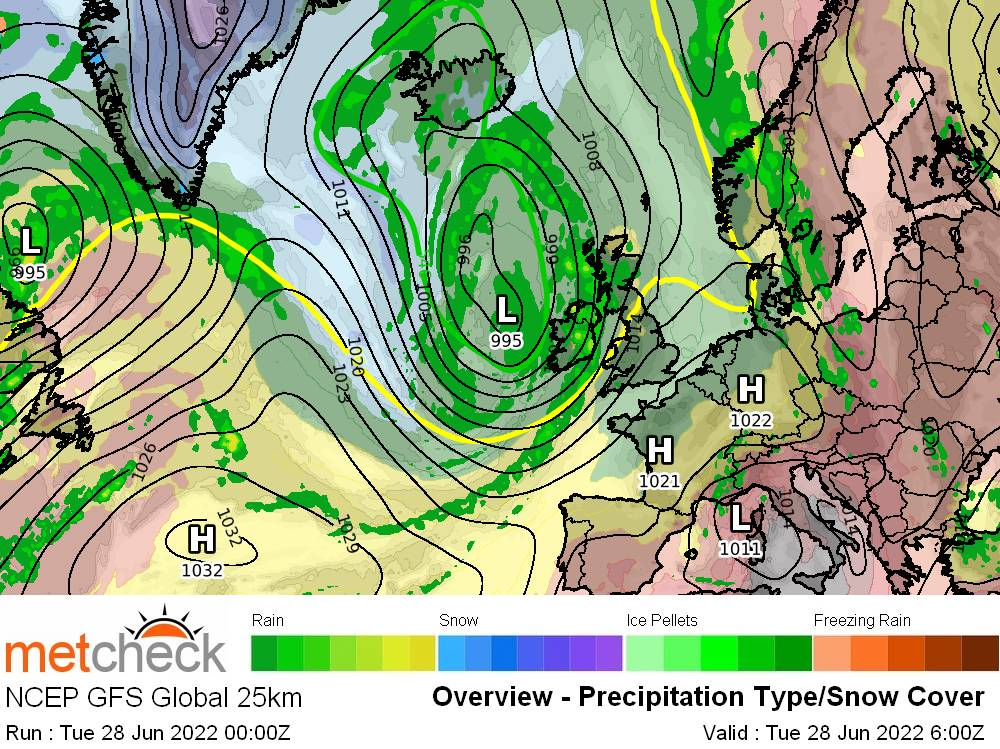 Temperatures remaining near the seasonal norm as Westerly winds continue to dominate... 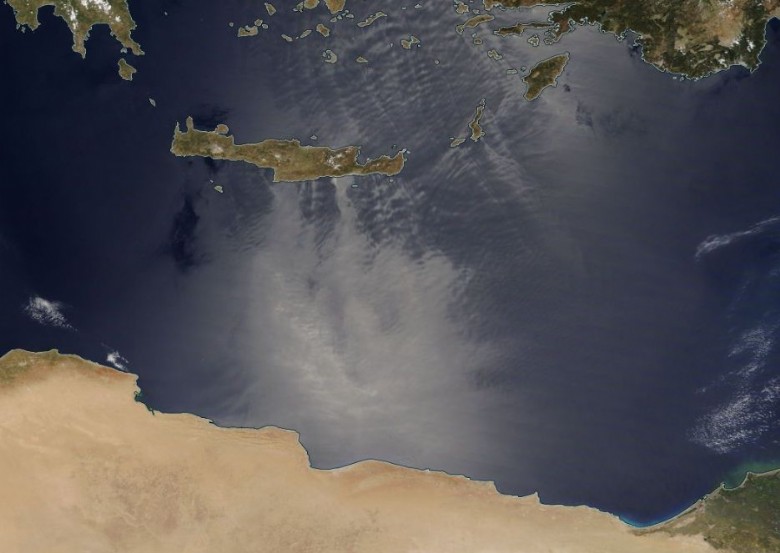 Sunglint to the South of Crete today and Southern Italy and Sicily in the sunshine... 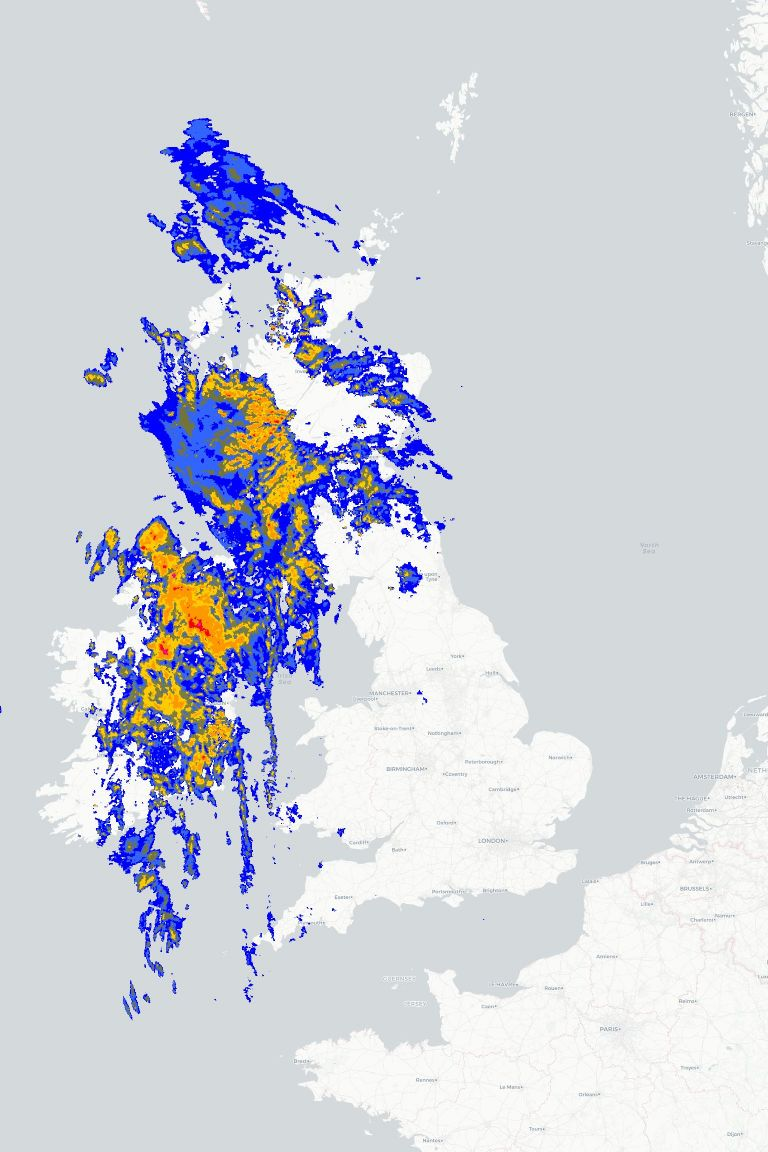 A band of heavy rain moves across Western areas today with the best of the sunshine in the East...

Want to see where precipitation is dropping out of the sky right now across the UK? No worries, check out the 15 minute radar below which loops through the last 6 hours of information. 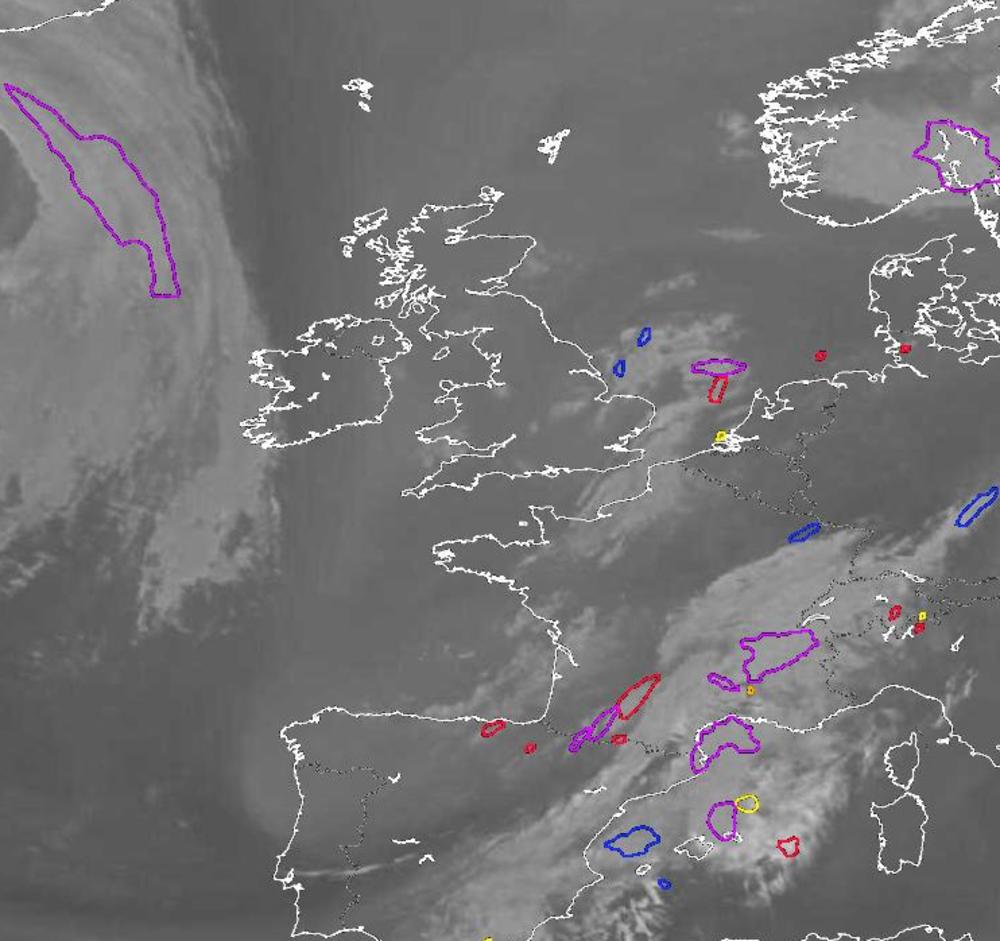 Whoah! How clever is this? The Metcheck Thunderstorm Tracker Satellite allows you to see the developing storms across Western Europe and tells you whether they are growing or decaying. Every 15 minutes we take a snapshot of the cloud cover then measure the temperature and height of the clouds and show you whether the area of clouds are developing into thunderstorms and what direction they are moving in.

Live weather data from around the country displayed on Google Maps

These are the latest NCEP GFS model weather charts at Metcheck.

You probably hear a lot about the Jet Stream in the news. It's either too far North or too far South. The jet stream is identified as winds at 300mb (during Winter) and 200mb (during Summer). It is these winds which are responsible for driving and developing weather systems across the Atlantic.

Metchecks own GHX model charts out to 240 hours ahead

The Metcheck 7 Day Forecast takes the best from the GFS weather models and displays it in easy to read maps for the UK out to the next 192 hours ahead.

The Metcheck 7 Day Forecast takes the best from the GFS weather models and displays it in easy to read maps for the world out to the next 192 hours ahead.

Showing you where frost and ice is expected to develop out to 16 days ahead.